Home Science The Strange Story of A Rare Meteorite More Than 4.4 Billion Years Old That Hit A Car

Observing the clear sky can be rewarding, especially at night. Most people get to see meteorites dissolve in the Earth’s atmosphere at least several times in their life. But not many people have the chance to see a meteorite up close outside a museum. 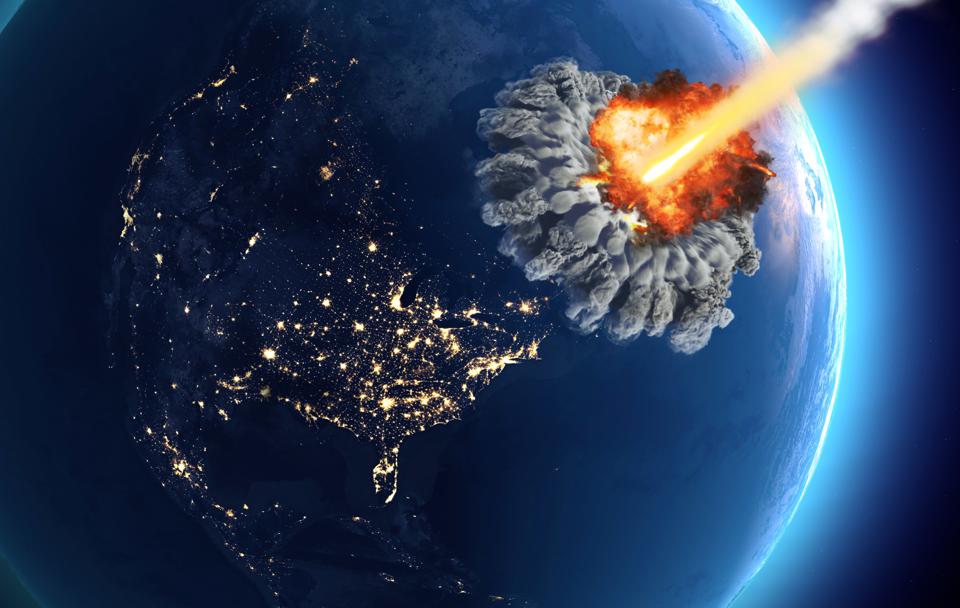 Prior to 1992, only a few meteorites had been caught on film. However, on October 9th of that year, the fall of the Peekskill meteorite was accidentally filmed by at least 16 cameras.

Since it was a Saturday afternoon, many high school students in Kentucky, West Virginia, and Pennsylvania attended local football games and recorded them, and at least 16 of them recorded the meteorite as it fell from the sky in the form of a bright and greenish fireball. As it traveled across the universe to reach Earth, it was moving at a speed of a staggering 8.8 miles per second.

The Earth’s atmospheric conditions slowed it down and it passed over Pittsburgh, Philadelphia, and Washington D.C. at a mere 164 miles per hour.

On the evening of October 9, 1992, Knapp, then 18-years-old, was a resident of Peekskill, New York — the town made famous-ish by the television show The Facts of Life (which purports to take place there). More importantly, she was the owner of a 1980 red Chevy Malibu which she had picked up, used, for $400. Knapp either didn’t have a garage or lived with her parents and had to park on the driveway. 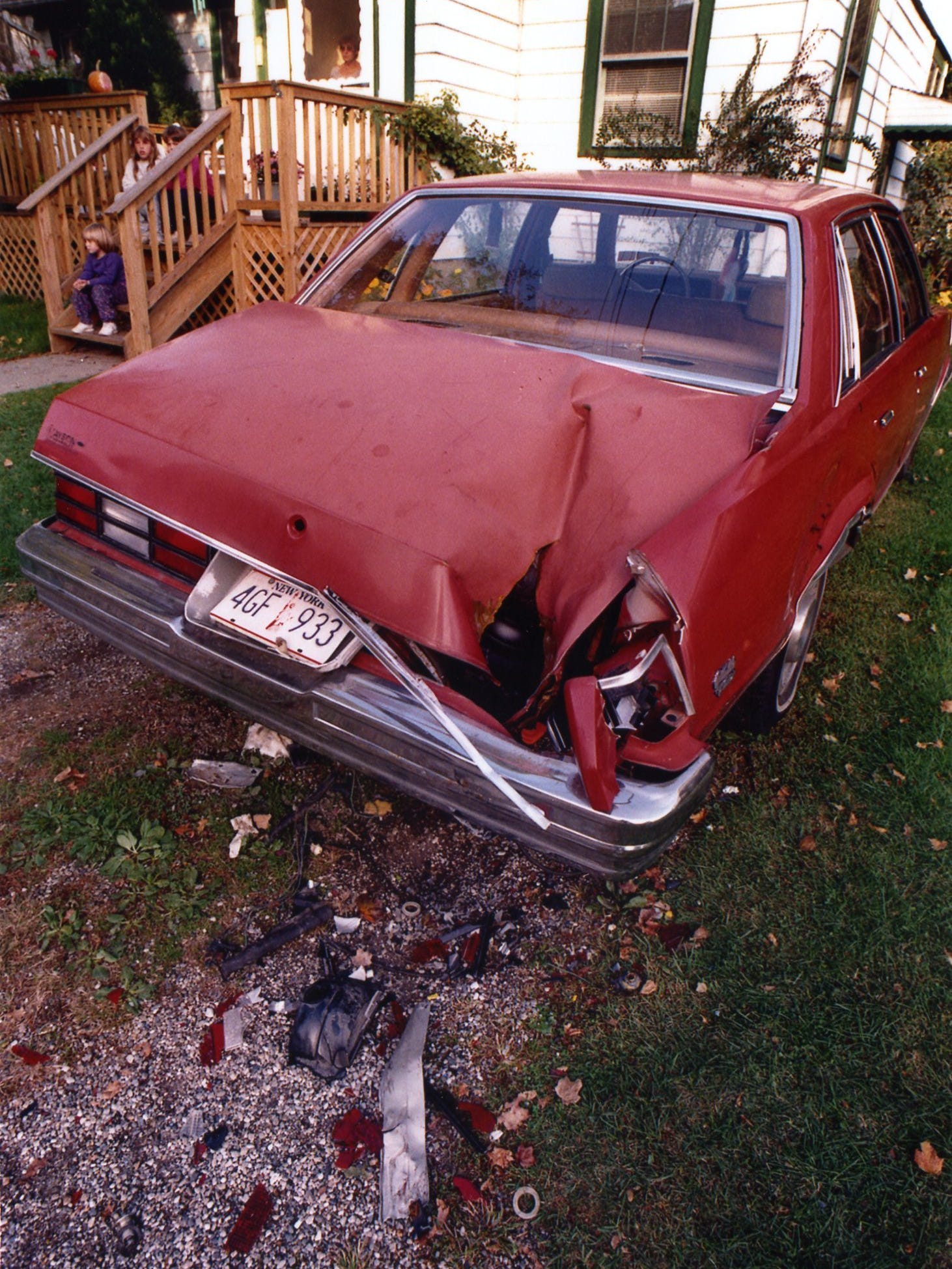 While that left the Malibu vulnerable to the elements, that shouldn’t have been a big deal. Typically that means rain, snow, sleet, hail, and the like, which aren’t going to cause much wear and tear on a car. But on that October day, the Malibu met a new, stronger foe: a meteorite.

The Peekskill Meteorite, as it quickly became known, soared through the skies of the northeastern United States — it broke up in the atmosphere near Kentucky, and could be visible in Pittsburgh (about 400 miles west from Peekskill), Washington D.C. (more than 250 miles south-southwest), appearing as a greenish fireball in the eyes of many. In today’s world, with smartphone cameras everywhere, you’d expect to get a lot of video footage of the event; that’s basically what happened in 2013 when a meteor exploded over Russia.

But that shouldn’t have been the case in 1992 — back then, if you wanted to shoot video extemporaneously, you needed a camcorder, like this. They were too cumbersome to carry around, though.

But we have videos of the Peekskill Meteorite — about sixteen of them, in fact. (Here’s one clip.) That’s because the meteorite had impeccable timing. October 9th of that year happened to be an autumn Friday, which meant that throughout the country — including the northeast — high school kids were playing in their weekly football games. Coaches, proud parents, and other spectators often came to the games hoping to capture a key play on tape. 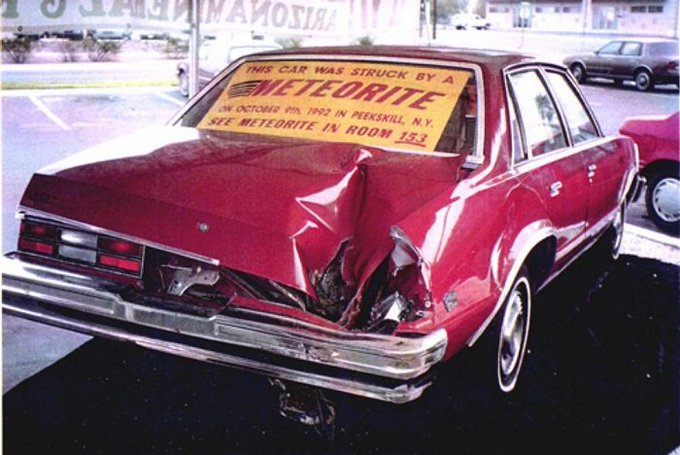 When a UFO appeared overhead, many of those cameras turned skyward. The brilliance of the event, captured on film, made the meteorite one of the more famous celestial events of the decade.

For Ms. Knapp, the events took a more personal tone. The meteorite flew over the United States, landing in Peekskill and, specifically, at her house. It smashed through her car, ripping up her trunk and pulverizing her rear-right taillight (as seen above) — certainly causing more damage than the $400 the car was worth just a bit earlier. That’s bad, and for sure, Ms. Knapp wasn’t very happy about losing her wheels.

But the buzz around the event more than made up for it. But the fame from the event ensured otherwise. Since then, the car became a historical curiosity, “touring [museums in] the United States, Germany, France, Switzerland and Japan,” per Wired. (While the meteorite itself was rather valuable — it’s not every day that the science community gets ahold of a sizeable piece of 4.4 billion-year-old space rock — it wasn’t obvious clear that a totaled 1980 Chevy Malibu would fare so well. ) 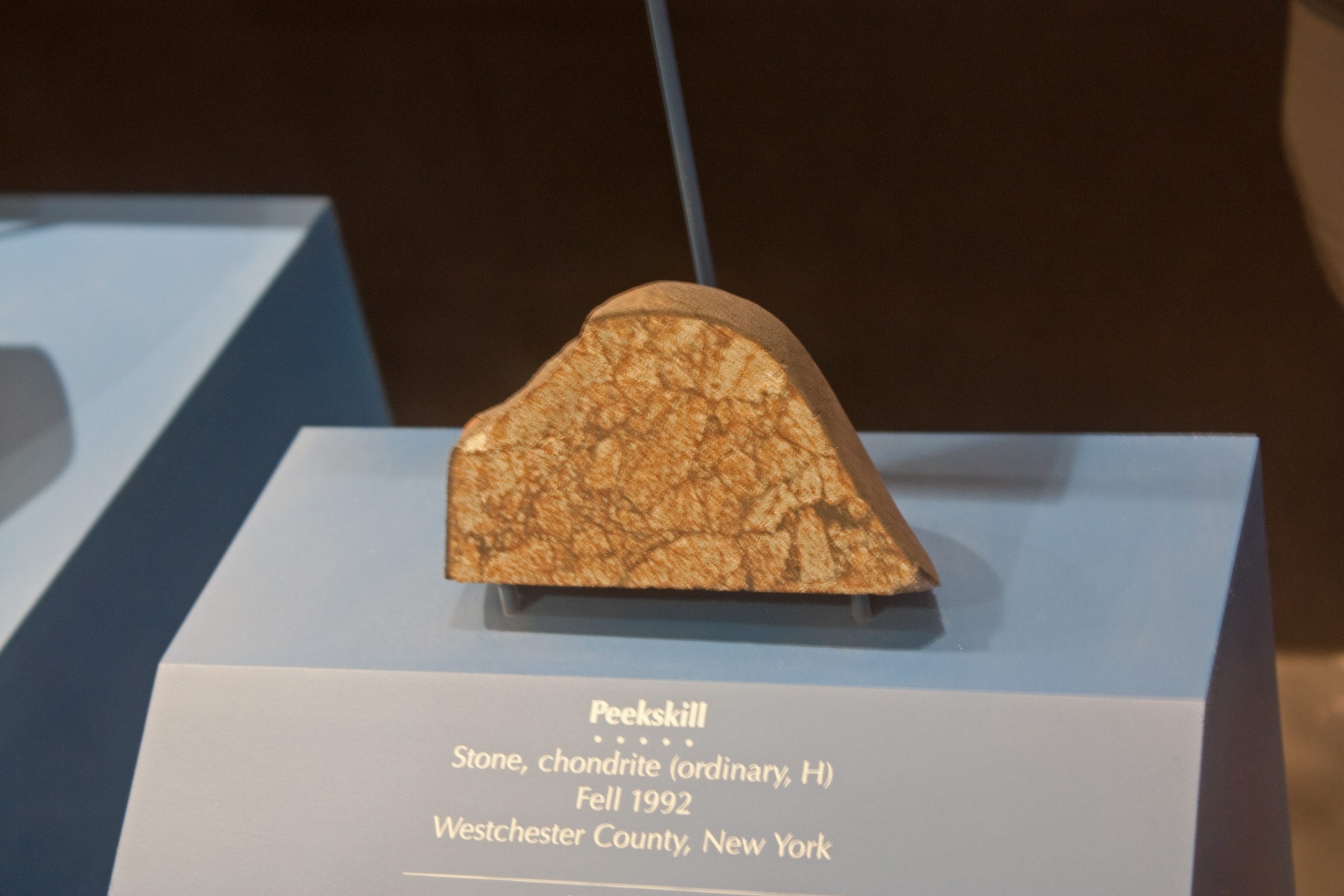 It wasn’t Knapp who arranged those trips — she had already used the car’s newfound fame to turn her bad luck around. Shortly after the Malibu met its end as a viable means of locomotion, a collector of meteorites and meteorite-related memorabilia bought the car off Knapp for the astronomical (sorry!) price of $10,000 — 25 times what she originally paid for it.

Bonus fact: Meteorites strike Earth quite often, likely averaging around once per day. But those pieces are often quite small and don’t get much notice.

And they typically don’t cause a lot of damage — especially not to human life. According to the American Museum of Natural History (which has a piece of the Peekskill Meteorite on display), “there are no known cases of a person being struck and killed by a meteorite.”