The Last of the Siberian Unicorns: What Happened to the Mammoth-Sized One-Horned Beasts of Legend?
Elasmotherium is a species of extinct rhino also known as the Giant Rhinoceros and Giant Siberian Unicorn. which has been living in the Late Pliocene and Pleistocene eras in the Eurasian region.

The “Moscow mandible”, holotype of Elasmotherium sibiricum.
The best known of the species here, the E. Sibiricum, which was the size of a mammoth, covered in hair, was supposed to have had a large horn protruding from the forehead, and hence the word “Siberian Unicorn.” The beast, according to early reports, stood about 2 metres tall, about 4.5 metres long and weighted 4 tonnes.

Deciphering the Siberian Unicorn’s Story
The species Elasmotherium is first named in 1808 by the Dirécteur Perpétuel of the Museum of Natural History in the University of Moscow, Johan Fischer von Waldheim.

All he produced to argue his case was the lower jaw, donated to the museum by Yekaterina Romanovna Vorontsova-Dashkova. But from this, the species was named and studied further.

In March 2016, a beautifully preserved skull was found in the Pavlodar region of Kazakhstan proving that the animal lived until the Pleistocene era, some 29,000 years ago, instead of the previously held belief that they had died out 350,000 years ago.

Based on the size and condition of the skull, it has been suggested that it was a very old male, but it is uncertain how the beast died.

Various theories have arisen concerning the look of the Siberian unicorn, along with its nutrition and habits due to the wide variation in reconstructions. Some show the beast galloping like a horse; others hunched over with head to the ground, like a bison, and others immersed in a swamp like a hippo.

‘Elasmotherium’ (circa 1920) by Heinrich Harder.
Debating the Siberian Unicorn’s Horn and Extinction

The issue of the horn is highly debated, typically concerning whether there was one, or not, how large it was, and what it was used for. Theories on the function of the horn range from defense, attracting mates, driving away competitors, sweeping snow from the grass, and digging for water and plant roots.

Since the beasts were herbivores, like our modern rhinos, this horn could not have been used to attack or kill prey. Only circumstantial evidence exists from sparse specimens to prove whether the beast was horned or not, and whether it was hairy or bald. However, there is some evidence to suggest that the creature was covered in hair, like the more well-known woolly mammoth.

Fossil of Elasmotherium on display at the Natural History Museum, London.
The main evidence to suggest that the Siberian unicorn was in fact horned is the frontal protuberance on the skull, which caught the attention of paleontologists in the 19th century and was immediately interpreted as the base for a horn. Evidence also shows that the horn would not have been circular. This is supported by a fossil with a non-circular, partially healed puncture wound in the base, usually interpreted as the result of dueling another male with a horn.

While males would have fought for their territory, their habitat spanned from the Don River to the east of modern Kazakhstan. Residue findings show a long habitation of these ancient rhinos in the southeast of the West Siberian Plain.

However, there is no clear reason why the final Siberian unicorns died out. Researchers have been looking into the specific environmental factors that may have caused the extinction of this species, as it may lead to answers to the extinction facing various species today.

The Legendary Unicorn
Legends of the unicorn, or a beast with a single horn, have been around for millennia in China and Eastern Europe. The Chinese “K’i-lin”, referring to some sort of beast, was translated into Turkish and Mongolic languages and lore. While the writers in all these languages did not know how to describe the beast, one common theme was the single horn, along with their vast stature.

A bronze vessel from the Warring States period shows an animal very much like one depicted in cave paintings that are said to be Elasmotherium: head down for grazing, horn protruding from the forehead, and head and shoulders slumped.

In 1866, Vasily Radlov found a legend among the Yakuts of Siberia of a “huge black bull” killed by a single spear. The beast was said to have a single horn so large that it had to be transported by sled. Other legends circulate in this region, usually concerning a large white or blue woolly bull with one large horn coming from its forehead.

From medieval Northern Russia comes a collection of ballads, called “Golubinaia kniga” or “The Book of the Dove,” coming from Zoroastrianism, but with Christian overtones. These ballads show a righteous unicorn battling a lion, representing lies.

The unicorn of these tales lived in a Holy mountain, and it was believed to be the mother and father of all animals. This creature saved the world from drought by digging springs of pure and clean water with its horn. At night, it wandered the plains and forged a path with that very same horn. 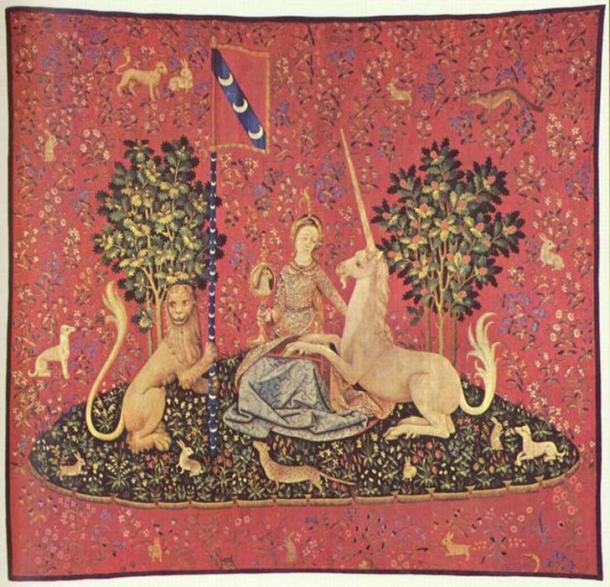 Maiden with Unicorn , tapestry, 15th century (Musée de Cluny, Paris).
This same creature appears in other religious texts, however, it is typically seen more as a symbolic creature rather than a real entity. The Arabo-Persian word for unicorn actually conflates unicorn and rhinoceros, looking to the rhinoceros as a bringer of truth and good in the world. In Christianity, the single horn is seen as a symbol of monotheism.

While mythology may point to the actuality of this creature, it is merely circumstantial evidence. More research, and more fossils, must be found before we can know for sure what this beast looked like, and whether or not unicorns were real.