The deserts of Saudi Arabia may look desolate, but they hold many important archaeological sites. One of the most important of these is the vast archaeological site at Hegra which has been classified a UNESCO World Heritage site . For the first time, the public can visit the site without restrictions and view the remains of a remarkable and mysterious civilization.

Hegra, also is known as Mada’in Saleh, is in the deserts north of Al Ula in northwestern Saudi Arabia . Today the place is quiet, but it was once a thriving city located on a major international trade route. This remarkable city was the sister city of the more famous Petra in neighboring Jordan. Hegra was the second city of the Nabateans, who were nomads who controlled the spice trade and who built an astonishing civilization in the desert. The Nabateans were experts in hydraulics, they were able to channel rainwater from the mountains into cisterns that allowed them to build spectacular cities in some of the most inhospitable environments in the world. 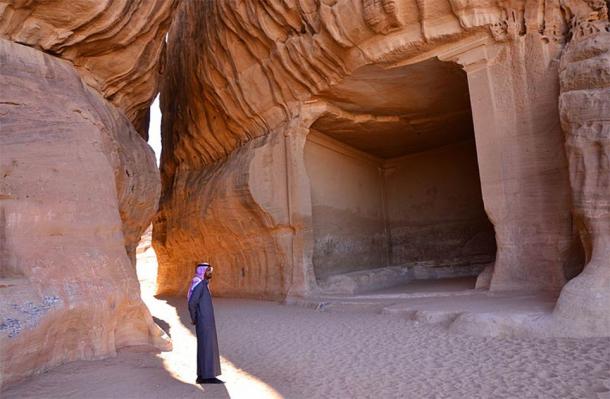 Hegra, also is known as Mada’in Saleh, was once a thriving city on a major international trade route.

Nabateans: Empire in the Desert

These nomads became immensely wealthy due to their trade in frankincense and other spices. The Nabateans, in particular, created a huge empire in the desert from the 4 th century BC to the 1 st century AD, when Emperor Trajan conquered them and they became subjects of the Romans. They were later forgotten until the rediscovery of Petra in the 19 th century. Remarkably, Hegra was left forgotten by all but the Bedouin until recent decades.

Despite their many achievements, we know extraordinarily little about the Nabateans. “The reason we don’t know much about them is because we don’t have books or sources written by them that tell us about the way they lived and died and worshipped their gods,” Laila Nehmé, an archaeologist who works at the Hegra Archaeological site, told the Smithsonian. That is why sites such as Hegra are so important. Much of what we know about this desert civilization comes from the study of their remarkable structures. 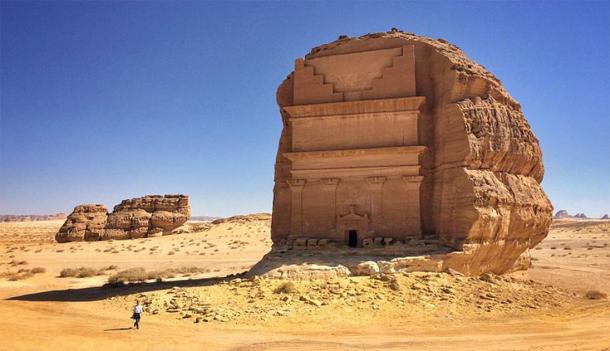 The best-known tomb at Hegra is Qasr al Farid tomb, dubbed the lonely castle of the Nabateans.

Today “Hegra is a metropolis turned necropolis,” according to the Smithsonian. Here there are many tombs and funerary monuments from the 4 th century BC to the 1 st century AD. They are ornately decorated in a distinctive style that shows the influences of other cultures, including Greek. Some are decorated with sphinxes and Medusa figures. The Smithsonian quotes Nehme as calling the style of the tombs “Arab Baroque” because of the elaborate combination of motifs.

In total there are 111 tombs, of which over 90 are decorated, recorded at the location. Many of the tombs have inscriptions, written in an early form of Arabic that warn the living not to interfere with the tombs. According to the Smithsonian, one inscription reads:

“May the lord of the world curse upon anyone who disturbs this tomb or opens it.”

Perhaps the best-known tomb at the site is the Qasr al-Farid, dubbed the lonely castle of the Nabataeans, which was probably the final resting place of a member of a powerful family. Despite being unfinished, it is a monumental structure with evidence of great workmanship and is almost four floors high. At Ancient Origins , we reported that the Qasr al-Farid tomb “has four pilasters on its façade, one on each side, and two additional ones in the middle.” The rest of the tombs have only two pilasters. It appears that it was built from the top down and this was also the case with the other burial monuments at Hegra.

Many of the tombs belonged to the Nabatean elite. Some experts, based on a study of the tombs, believe that the Nabateans were not an ethnic group, but they were members of a multicultural state. A study of the inscriptions shows that some of the elite adopted Roman titles and they had close trading relations with the southern territories of Rome.

UNESCO reports that “the site also features some 50 inscriptions of the pre-Nabataean period and some cave drawings. They may have been made by the ancient people known as the Thamuds who are mentioned in the Quran or members of the Dedan culture. According to UNESCO, the site “bears witness to the development of Nabataean agricultural techniques using a large number of artificial wells in rocky ground.” Remarkably, many of these wells still supply water to the local people, a testament to the engineering genius of the Nabateans.

Hegra is also the site for the stunning Winter at Tantora Hot Air Balloon Festival which takes place in the skies above every year.

Open to the Public

Despite being subjugated by the Romans, the city of Hegra continued to prosper until the 3 rd century AD. When the trade routes shifted, the caravans stopped passing through the city and it went into rapid decline. It was abandoned by the Middle Ages, but the Ottomans built a fort at the site during World War I during the Arab revolt which was instigated by Lawrence of Arabia.

In recent years, a joint Saudi and French project has excavated and restored the site. The Saudi government has now opened up Hegra to the public for the first time. Before this, special permission was needed to visit the sister city of Petra. Now it is possible to hop on a bus and visit the remarkable remains of the caravan city. Local storytellers (Al Rowah) have been employed to bring the history of Hegra to life. The opening of the archaeological site is part of a Saudi policy to diversify its economy.

Archeology September 28, 2022 • 0 Comment
An abandoned mausoleum and silver extraction taking place on an industrial scale at a Roman site in rural Kent has…

Ancient Egypt: A Decorated Tomb And Anthropomorphic Coffins With Mummies

Archeology September 27, 2022 • 0 Comment
The Middle Kingdom tomb of Thaw-Rakht-If (or Thaw-Irkhet-If), the overseer of the mummification shrine in the precinct of Mut at…

Archeology September 26, 2022 • 0 Comment
Since at least the 18th century, there have been discoveries in northwestern continental Europe and Britain of “bog bodies” –…

Fossil Octopus Is A Jurassic Jewel

Archeology September 26, 2022 • 0 Comment
WHAT THE OCTOPUS WAS 165 MILLION YEARS AGO Paleontologist Isabelle Kruta from the University of Pierre and Marie Curie in…