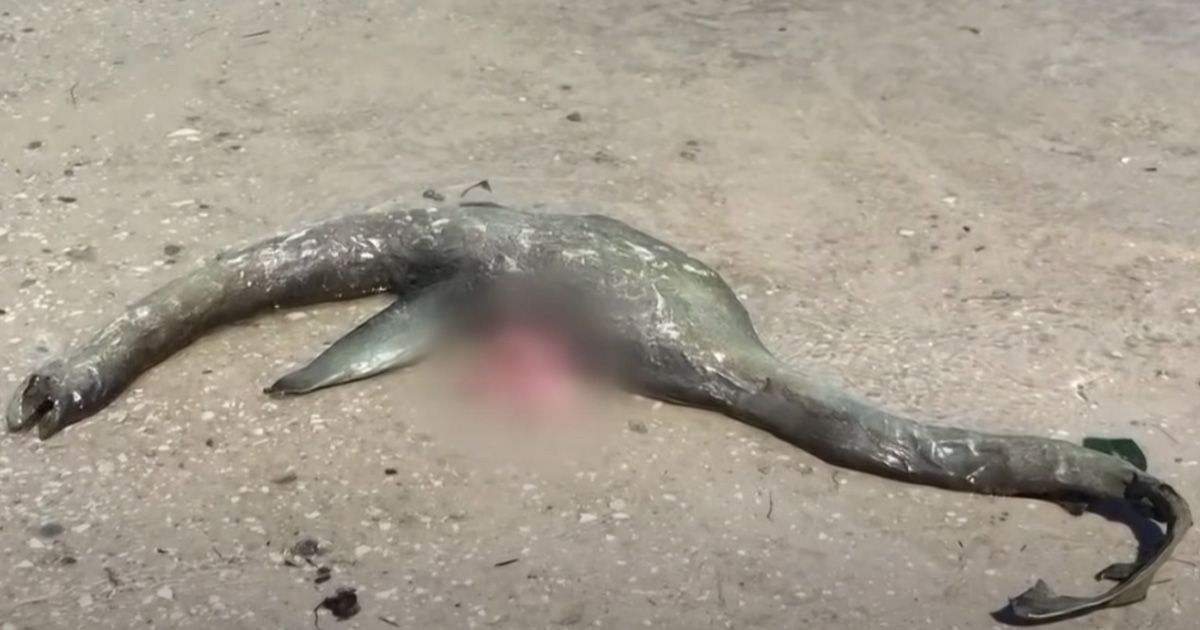 A strange-looking animal has washed up on a beach in Georgia, and is making headlines thanks to its resemblance to the fabled ‘ Loch Ness Monster’.

Georgia resident Jeff Warren stumbled across the remains of the creature while boating with his son at Wolf Island National Wildlife Refuge in Golden Isles, Georgia.

He originally thought it was a dead seal, but upon close inspection he realised it was something… weirder.

With its long neck and fins, the 1.5 metre (5 foot) long animal looks more like some kind of prehistoric sea monster than anything we’re familiar with – Warren referred to it as a “Loch Ness-type thing”.

He shared his footage with local news stations, and reached out to the US Fish and Wildlife Service to get some insight into what the heck he’d found.

So far, the experts have been left scratching their heads. Birds were already pecking at the remains when Warren found them so it’s hard to know how much of the animal has already decomposed.

But of course, the good people of the internet have their own hypotheses.

It doesn’t help the speculation that there’s already a local legend about the existence of “Altie” or “Altahamaha-ha” – Georgia’s own version of the Loch Ness Monster.

But this isn’t the first (or second) time that a weird “mystery” creature has washed up, and so far they’ve always g one on to be identified with a perfectly reasonable explanation.

Famously, a fanged ‘monster’ that appeared on a beach after Hurricane Harvey turned out to be an eel.

In this case, director of the US Fish and Wildlife Service Dan Ashe told Action News Jax that sea animals often decompose in a way where they can resemble a Plesiosaur.

Specifically, he said a 9-metre (30-foot) basking shark could decompose to look like it had this type of long neck and tiny head.

Here’s a basking shark that washed up in Rhode Island in 2013:

We’ve reached out to more experts for comment and will keep you updated when this strange-looking animal is finally identified.