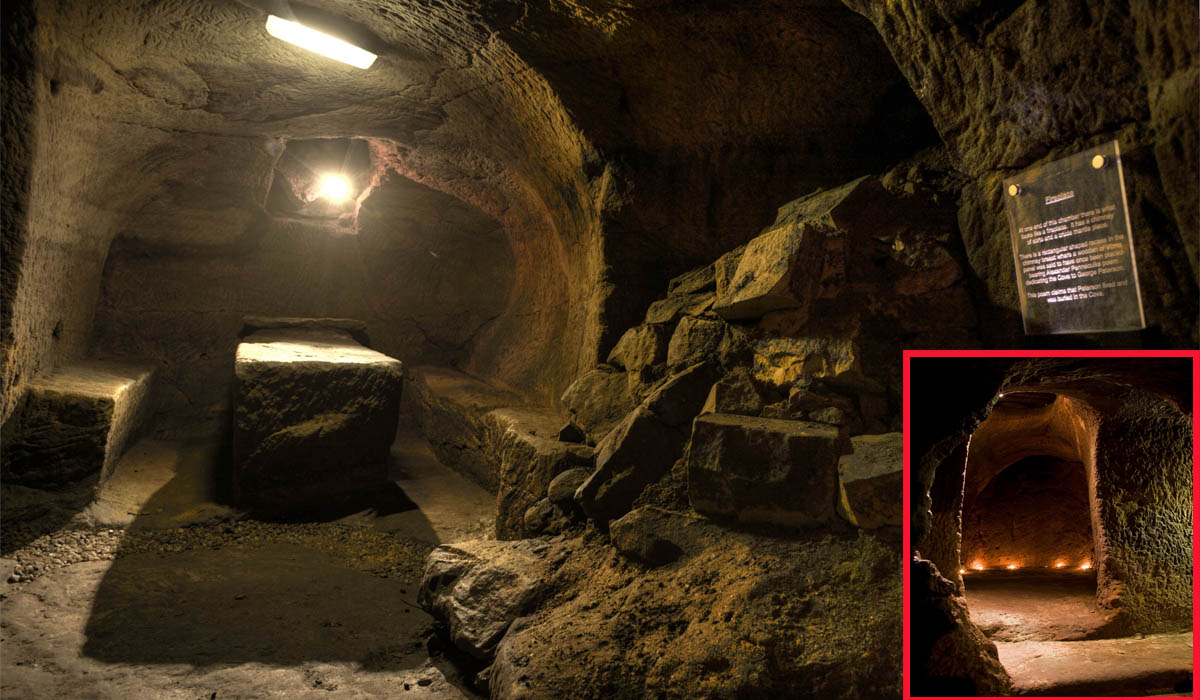 Gilmerton Cove is a mysterious cave system on the outskirts of Edinburgh, Scotland.

For a long time, it was considered the work of a blacksmith George Paterson, who used it from 1724 to 1735 (or 1737), according to ancient records.

But there is a problem. Even the most skilled one, this blacksmith, would not have created the entire system himself.

His claim to have spent five years excavating the place was long accepted at face value, though a moment’s thought tells you that such a task would have taken the lifetimes of several hard-working men. So, most probably, he only cleared out the rubble and backfill of a much earlier period.

So the question remains: who were the builders responsible for creating this mysterious underground structure?

Gilmerton Cove is a series of underground passages and chambers hand-carved from sandstone in a former mining village. Initially, the underground complex was lit by openings to the sky, but they were covered long ago.

The caves are connected by a 12-meter main corridor, equipped with two entrances of which the height varies between 1.60 and 3 meters. After five years of restoration work, it was opened in August 2003 and now houses ingenious audio and visual displays. Still, it does not mean that Gilmerton Cove has revealed its old secrets. Various theories about the origin of the place and its destination cannot shed light on the Cove’s mysterious past.

Extensive historical and archaeological research has failed too. However, Gilmerton Cove was the 18th-century residence of the local blacksmith George Paterson, but it has never been confirmed that the man was responsible for any carvings in the Cove.

Was it once a smugglers’ secret place, a gathering place for the Knights Templar? Or perhaps, a covenant hideout or a shelter for someone wanting to hide? No one has clues.

Extensive archaeological and historical research failed to explain the Cove’s mystery once and for all. In 2017, a study by scientists from the University of St Andrews and the University of Edinburgh using ground-penetrating radar revealed that the network of passageways and chambers might be more extensive than previously thought.

In her book “111 Places in Edinburgh That You Shouldn’t Miss”, Gillian Tait draws our attention to “the scale of the place, and the shape and texture of the womb-like walls, all hewn out of the living rock with tiny strokes of a chisel. But what’s even more surprising is the built-in furniture, including long benches and tables, gently curving and beautifully cut from the solid sandstone. One of the tables is horn-shaped and has a deep concave bowl cut into it. It’s as if the Flintstones’ house had been remodeled by a designer from 20th-century Milan….”

“The underground complex was originally lit by openings to the sky, but these have long since been covered over.”

If the workshop was there once, due to lack of ventilation, such working space was never in use. There’s a well next to it, but no water, and wooden doors separate two smaller rooms.

In the walls of the structure were once holes, which over time, were sealed. It means that the rooms were once ventilated from above, and the incoming light well-lit the whole system.

The place is undoubtedly old and has been reused many times and by many people over at least recent centuries. It is still possible that Gilmerton Cove’s true beginnings are much more ancient. Perhaps one day, it will be possible to prove that the Cove as we call it today is a sacred prehistoric site. It has already been suggested that it was a Druid temple dated to the times long before the settlement of Edinburgh.

Carved signs of the circus and the coals, clearly visible on the tables, indicate masons, and the initials (quite deep) can suggest either the work of a drunker) or someone belonging to society.