The body of an ancient Sarmatian warrior has been unearthed in an early Iron Age burial mound along the planned route of the Far Western Bypass of Krasnodar on the M-4 Don highway in Russia. According to an article in Russian Highways another nine burial mounds have also been discovered at the archaeological site but only two of these are well preserved and had not been destroyed by looters.

Archaeologists have established that the newly discovered remains are of an adult male in his mid-40s and the grave goods discovered in his burial suggest he had been of high status within his community. Asserting this belief, an article about the discovery in Archaeology News Network says they discovered the remains of “a quiver, richly decorated with a bronze cover, as well as several iron arrow and spear heads were found next to the skeleton,” indicating a warrior burial. 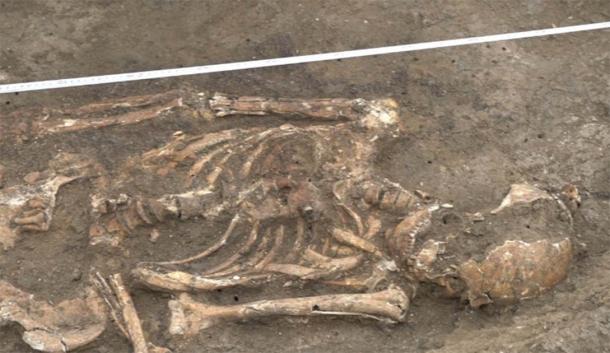 The nomadic Sarmatian people were of ancient Iranian heritage and they are known to have migrated to the Ural Mountains of Central Asia between the 6th and 4th centuries BC, and Sarmatian territory stretched from the Caspian Sea to the Vistula River and south to the Danube and the people were independent tribes that occupied parts of Russia, the Ukraine and the Baltic states, Romania, Poland and parts of Central Asia. The website  UNRV History says ancient Greek and Roman historians and writers speculated that the Sarmatians were actually the legendary race of fierce warrior women, the Amazons, because their women had much “higher status in society than women in Mediterranean societies.”

In this recently discovered burial chamber the male warrior was found with his knees and ankles bandaged, the reason for which is currently unclear, and the man was also covered with a finely made felt cloak. At his head and feet the excavators discovered two well preserved clay jars with twisted handles, and two bone beads and numerous animal remains are all thought to have been food offerings for the deceased. 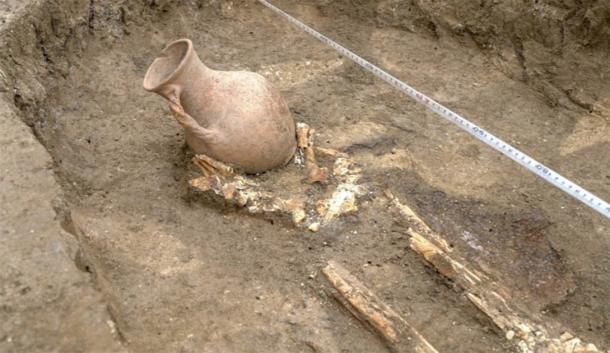 Two well preserved clay jars were place at the head and feet of the man.

in August 2015, Ancient Origins published a news piece about archaeologists conducting an exploratory dig for a Russian airport when they made the chance discovery of an ancient noblewoman’s grave filled with what was described as “very valuable items” including “a sword and knives, gold and silver jewelry, elaborately decorated clothing, a bronze mirror and a decorated bronze bucket.”

The archaeologists also discovered a concealed hiding place within the woman’s grave and in it they found knives and an unfinished sword with brooches on its handle, and it was graves like this one that belonged to a 1st century AD Sarmatian woman that are believed to have greatly inspired Greek and Roman accounts of the legendary warrior-women, the Amazons. An article in the The Daily Mail said the archaeologists also found a gold flask, 100 iron arrowheads, a gem with an Aramaic of Phoenician inscription that was laid upon her chest, pottery and remnants of a bronze bucket that was decorated with a Gorgon’s head and floral motifs. 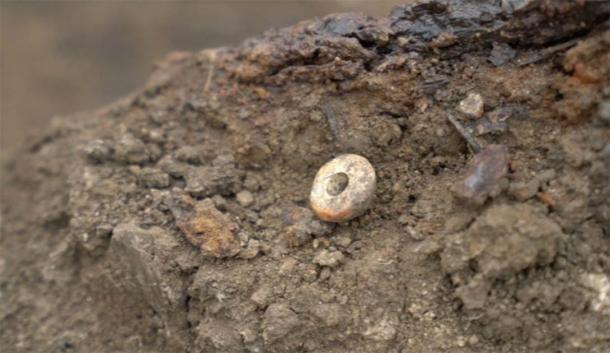 Ancient Sarmatians All Over

Adding to the wave of ancient Sarmatian discoveries, last May Archaeology News Network published about article about a farmer, Rustam Mudayev, who had been digging a pit on his land near the village of Nikolskoye, in Astrakhan region, close to the Caspian Sea in southern Russia, when he unearthed 2,000-year-old treasures inside an ancient burial mound. 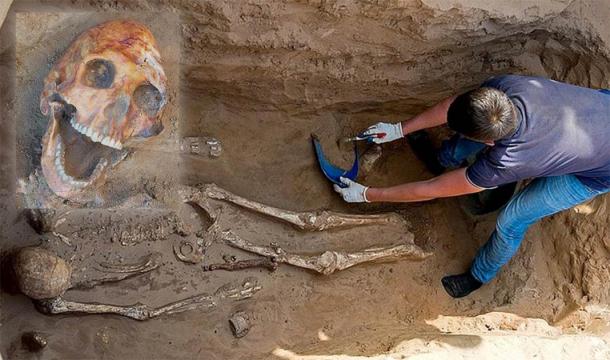 Archaeologists recovered the tomb of a “nomadic royal, along with a laughing man with an artificially deformed egg-shaped skull” together with stunning gold and silver jewelry, weaponry, valuables and artistic household items next to the chieftain’s skeleton. Archaeologists found his personal collection of knives, a small mirror and different pots, evidently signaling his elite status, and they also collected a “gold and turquoise belt buckle and the chief’s dagger along with a tiny gold horse’s head which was buried between his legs, and other intricate jewelry.”

Speaking of all these Sarmatian discoveries, Astrakhan region governor Sergey Morozov told Archaeology News Network that “These finds will help us understand what was happening here at the dawn of civilization,” and this new male warrior will add greatly to that growing archaeological database.

Archeology September 28, 2022 • 0 Comment
An abandoned mausoleum and silver extraction taking place on an industrial scale at a Roman site in rural Kent has…

Ancient Egypt: A Decorated Tomb And Anthropomorphic Coffins With Mummies

Archeology September 27, 2022 • 0 Comment
The Middle Kingdom tomb of Thaw-Rakht-If (or Thaw-Irkhet-If), the overseer of the mummification shrine in the precinct of Mut at…

Archeology September 26, 2022 • 0 Comment
Since at least the 18th century, there have been discoveries in northwestern continental Europe and Britain of “bog bodies” –…

Fossil Octopus Is A Jurassic Jewel

Archeology September 26, 2022 • 0 Comment
WHAT THE OCTOPUS WAS 165 MILLION YEARS AGO Paleontologist Isabelle Kruta from the University of Pierre and Marie Curie in…